A History of the Iditarod

The Iditarod is often known as the last great race on earth, and for good reason. Historically, dog sleds were used to deliver mail, groceries, gold, furs and medicine. It wasn’t until the winter of 1925, when there was a diphtheria outbreak in Nome AK, that the long distance relay was popular.

During the diphtheria outbreak the closest antitoxin serum needed was 1,000 miles away in Anchorage. Sea transport was impossible due to frozen waters. The only possible way to deliver the serum would be by foot, but that was nearly impossible. The towns gathered together and a relay team of dog sleds were set up. The relay was successful and this epic course inspired the Iditarod. 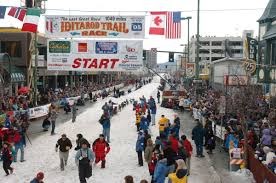 People come from all over to celebrate the annual Iditarod race

The Iditarod race officially began in 1973 to celebrate Alaska’s centennial. The race is a symbol for mushers (people who run the dog sled) and their team of 14 dogs to physically and mentally test their resilience. The trail crosses mountain passes, rivers, forests, and the wind chill can reach -100 degrees Fahrenheit.

In total, the trail is nearly 1,000 miles, and the mushers complete this in about 15 long days. The fastest time is 8 days, 3 hours, and 40 minutes. As years passed and the race gained popularity, two separate race trails were established, a North trail and a South trail. The small towns that the race went through were getting impacted by the traffic of the race. Subsequently, the two trails now alternate every year to minimize impact.

As an observer there is much to see with dog mushing and the Iditarod in Alaska. If you are lucky enough to be here in early March you can view the beginning of the Iditarod yourself in downtown Anchorage. Part of the fun of this race each year is talking to the mushers. It’s common to wish them good luck and say hello to your favorite musher before they begin the race. Dog sledding tours are available year round at a variety of locations around Alaska, so you can feel a small taste of what the mushers go through during this intense journey.