The Humpback whale, Megaptera novaeangliae, is one of the largest marine mammals to inhabit every ocean of the Earth. With that being said, the Humpback is no stranger to the shorelines of Alaska, but rather an annual seasonal resident. Although this species is considered endangered, over 10,000 Humpbacks migrate thousands of miles from the warm waters near the equator to their feeding grounds in the arctic regions.

These whales are named after the prominent hump that rest just in front of their dorsal fin. Humpbacks have an average length of 49 to 52 feet and can weigh between  35 to 50 tons! (Marine Mammals). These oceanic giants are easily spotted by the bright white bottoms of their fins. Humpback whales are typically grey or black with the exception of these fins that are about the third the size of their body length. 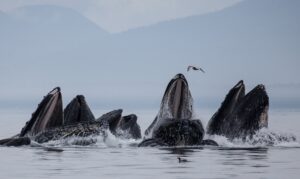 A display of bubble net feeding

These baleen whales head to feeding grounds for months to build up fat stores to survive through the winter months. They are well equipped with huge mouths and a pleated throat to achieve optimal feeding. The pleats on their throats expand as the mouth opens and then contracts, forcing water and prey through the hundreds of plates, known as baleen. These act as a sieve to devour small fish, plankton, and krill.

Humpback whales will display a distinct feeding pattern called bubble-net feeding. This is a collaborative effort among whales. One whale will coral a school of fish while one or two additional whales swims beneath them. These whales then blow bubbles underneath the grouping of fish and spirally swim upward. This creates a bubble tunnel with a spiraling force. And, contains and disorients the fish while the whales lunge into feed. (Alaska)

In the fall the whales will head towards tropical waters to find a mate and breed. The food supplies are low in the tropical regions and the Humpback will rely on their fat rich blubber they built up in the summer. During this time, males exhibit competitive behaviors and often strike each other, leading to bloody injuries. Humpback whales reach sexual maturity between the ages of 4 and 10 years old. A female will birth one calf every 2 to 3 years with an 11 month gestation period. These ocean giants are known to live to be anywhere from 80 to 90 years old. (NOAA)

Humpback whales can be observed breaching through the water and slapping the ocean surface with their giant fins. Scientist speculate that these behavior displays may just be for fun. They are also known for their long, elaborate songs. They are known to continue on for hours on end and can be heard from great distances in the ocean. One possible theory is that they sing so as to communicate and attract partners for breeding. (National Geographic)

Before 1985, commercial whale hunting decimated whale populations. In lieu of this drastic decline, a federal halt was placed on whale hunting. In addition to this prohibition, Humpback whales were added to the Endangered Species Act by the United States in 1973. They still face many threats from habitat disturbances, vessel strikes, and entanglement in fishing gear. However, since the protections were introduced, the population has been steadily increasing.

Whales are essential to ocean environments and beyond. With the sheer amount of food they consume daily they become one of the most important food system stabilizers. Even their excrement plays an important role in overall environmental health (Whales). In other words, whales are a true guardian to the greater health of our planet. By supporting conservation efforts and preservation of ecosystems we can help ensure thriving whale populations for generations to come.