Every summer thousands of whales migrate to the expansive feeding grounds of Alaska’s shorelines. The Orca, also known as the Killer Whale, joins the spring exodus from warm tropical waters to the cool coastal areas. While few Orcas stay year round in the frigid winter waters, many migrate during the spring to the fall. 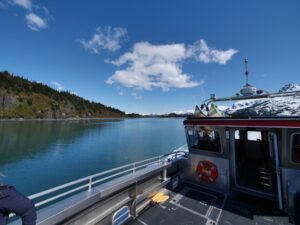 Ancient sailors once spotted Orcas hunting and feeding on a larger whale species, thus giving them the title of Killer Whale. Orcas however are not whales by species, they are the largest member of the dolphin family. Similar to their smaller counterparts, the Orca uses echolocation, locating objects by reflected sounds through a series of clicking noises. They use this technique to navigate and hunt for food in the murky depths.

These marine mammals are easily recognized by their markings. They have a black back, white eye patches, and a striking triangular dorsal fin. Males are the larger of the sexes and can reach lengths of 27 ft. while females are around 23 ft. For some perspective, this is relatively the size of a school bus! The males have a much larger dorsal fin and weigh almost twice as much as females. Many whales are identified by their distinctive grey or white saddle behind their dorsal fin. (Alaska Fish and Game)

Orcas travel in large groups called pods that can reach up to 40 family members. (NatGeo) These families are made up of both juveniles and adults. Most groups congregate around the Southwestern shores of Alaska. Resident Orcas feed exclusively on fish while transients feed on squid and marine mammals such as seals. (NOAA) These carnivores are highly social and intelligent creatures. Each pod has a distinctive dialect that members can recognize at a distance.

Orcinus orca live within intricate family systems that rely on strong social bonds. These social bonds are passed down from generation to generation, research shows, and is essential to overall health in the population. (NOAA) Exploring the coast may lead to a first hand account of Killer Whales in their natural habitat and a better understanding of their complexity.