Two sub-regions make up the greater area of Southwest Alaska. One region consists of over a thousand miles of islands that jut into the Pacific Ocean. This includes but is not limited to the Aleutian Islands, Pribilof Islands, and Kodiak Island. The other is the mainland, veined with rivers and outlets, that eventually reach the ocean.

The Alaska Peninsula spans over 500 miles of mainland shore. The southwest falls between Bristol Bay and the Gulf of Alaska. The landscapes of the northern Alaska Peninsula have been shaped by volcanism, tectonic uplift and subsidence, and broad-scale glaciation.(NPS) Simultaneously, the Aleutian and Alaskan Range fall inside this indistinct boundary.

Southwest Alaska spans across three Alaska climatic zones and 11 ecoregions. Within this variety of ecosystems a majority are coastal. Heavy rainfall and cool temperatures make up a majority of the climate here. Additionally, shorelines are known for unexpected and often violent storms. High winds can pick up at any moment and reach up to 100 mph! (NPS) These lush and bountiful ecosystems range from coastal rainforest, to boreal forests, to wetlands, to rivers and lakes, and more. 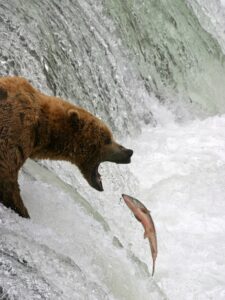 Cities and towns located on the islands are accessible by boat and sea plane mostly. Coastal ports like Kodiak, Dutch Harbor, and Adak are popular wilderness getaways. Native tribes still continue indigenous fishing and hunting traditions in this region.

The Aleutian Islands are remarkable in volcanic formation as well as the vibrant life they bring to the shores. These coasts provide essential ecosystems for more than 40 million seabirds. (Alaska) Travel to one of the many rivers that outlets into the ocean and observe the life cycle of millions of salmon. Not far from there you can watch well fed bears fishing for salmon at Katmai and Brooks Fall. In other words, this region is for those looking to observe and experience the raw elements of the wilderness and coastal intricacies.