Nome is located on the south end of the Seward Peninsula on the Norton Sound. This site is famous for taking claim to the finish line of the annual Iditarod sled dog race. The city is characterized as a subarctic climate. This leads to long cold winters and short cool summers. On the other hand, the coastal position of the area keeps temperatures relatively mild. 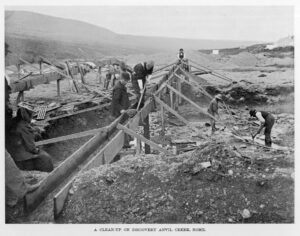 Malemiut, Kauweramiut, and Unalikmiut Eskimos have occupied the Seward Peninsula historically, with a well-developed culture adapted to the environment. (Kawerak) These native peoples have lived here for thousands of years. In 1898, the “the lucky swedes”, Lindeburg, Lindblom, and Brynteson, struck gold and the famous gold rush began. Over the following year, tens of thousands of people filled into Nome in search of gold.

By the turn of the century Nome’s beaches had turned into tent cities as over 20,000 people sifted through sand to find placer gold. Additionally, a railroad was constructed, paving the way for millions of dollars of gold to be transported and sold. (Moon) The city of Nome then formed in 1902.

1925 marked the heroic origin story of the Iditarod Race. A diphtheria epidemic had hit the town and required an emergency transportation of a serum to save the people of the area. From over 650 miles away in Nenana, mushers and dogs raced across the snowy tundra to deliver the medicine in time. During the WWII efforts, the city found themselves transporting planes for the war.

Today this region subsists off small gold mining operations, tourism, and commercial fishing. Additionally, this is all intertwined with the vibrant native culture that lives here. The Iditarod Trail Sled Dog Race still runs every year, starting in Anchorage and ending in Nome.

Nome is a transportation station for surrounding areas as well. This city has an established population that is currently on the rise. Native cultures are world renowned for their carving of white ivory as well as their cultural music here. 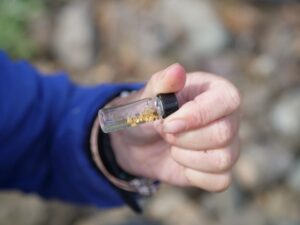 Residing on coastal shores, this historic area provides a variety of ways to explore and connect with the culture and region. The winter is a great time for snowmobiling, skiing, king crab catches, watching the finishers of the Iditarod, and grabbing some spectacular sightings of the Northern Lights.

The summer in Nome opens to more antique experiences so as to explore the gold mining operations and take your hand at gold panning. The wildflowers spread in abundance and add another level of grandeur to already spectacular hikes. Fishing is plentiful off these shores and nearby rivers. And local eateries scatter through the town. A variety of accommodations to rest your head are available as well.