Bristol Bay is a highly sought after paradise for those who revel in the abundances that Alaska has to offer. The main attraction, the life cycle of salmon. Fresh water pours into the bay, creating a perfect space for the largest annual sockeye salmon run in the world. That is to say, about 38 million fish return to spawn in the rivers that outlet into the bay. The salmon are the root source for the fertile land that lines the nearby shores and supports a worldwide food web.

Bristol bay is located in southwest Alaska on the eastern most arm of the Bering Sea, near the northeastern end of the Alaskan peninsula. This region takes claim to some of the most extreme tidal exchanges with up to 30 feet in exchange at times! There are many shoals, sandbars, and shallows that are scattered about the bay making navigation tricky. However, this does not deter the amount of skilled fishers and captains that travel these waters.

Living by the Salmon 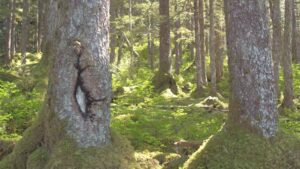 When the salmon spawn comes to an end, the salmon die near the shores where ancient forest use their nutrients to fertilize the land

Not only do commercial and sport fishing thrive here but subsistence fishing is still a very important part of life for the surrounding communities. 25 different tribes line the coasts of Bristol Bay. This bay supports the only two remaining tribes that subsist off the salmon, the Yup’ik and Dena’ina. This culture has centered around the salmon for their language, artwork, and life style.

There are over 29 different fish species that frequent this bay, Sockeye being the primary one. This abundant body of water supports 46% of the world’s population of Sockeye salmon! Additionally, the area provides a natural habitat for all five Alaskan salmon species. Bristol Bay’s salmon populations are entirely wild. (EPA)

This lush fish population provides a plethora of food source to the resident and migratory bird populations as well. When the salmon start to spawn up the rivers they end their life cycle at the roots of great forests like the Tongass National Forest, thus fertilizing the flora and further supporting the fauna of the land. Simultaneously, the watersheds from nearby rivers happen to be rich in minerals that enhance food sources.

Bristol Bay plays a large economic factor. For example, it supports over 15,000 jobs and generates $658 million in total labor income per year. At the same time, the bay is worth over $1.5 billion. (SaveBristolBay) Fisheries, tribes, community members, and those who value these natural resources continue to uphold the protection and consideration that has aided in the conservation of this region for thousands of years.