Fairbanks is located in east-central Alaska next to the Chena River. (Britannica) This is the largest city in the Interior of Alaska. This valley lying urban area is warm in the summer and cold in the winter. Fairbanks is prone to more extreme temperatures, but is relatively dry.

The original people of this valley are the Athabaskan natives. These nomadic people thrived off the land and it’s harvests for thousands of years. Captain E.T Barnette had established a trading post in 1901. And then, just one year later gold was struck just 16 miles down the road.

That establishment became a hub for the Pedro Dome gold rush. Additionally, the gold rush would come with disease that would take out portions of the native populations. In 1903, the Third Judicial Court was moved to Fairbanks. The city grew from establishments that stemmed from the court.

Barnette became the first mayor of the city. Further, he went on to become the president of the Washington-Alaska Bank. Miners continued to grow in population over the next decade. In 1938, Fort Wainwright was constructed and the Eielson Airforce Base in 1942. To improve transportation routes, the Alcan Highway was established in the 1940’s. And by the 1970’s the Trans-Alaska oil pipeline began construction near by and oil harvesting commenced in the Prudhoe Bay oil field. 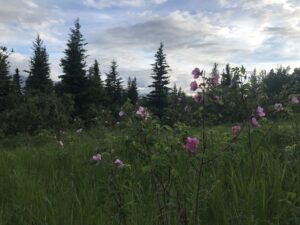 Wild rose growing in an open field alongside the forest

Both the base and fort still operate today. The economy centers around lumber, fur trade, and mining. Tourism and being a supply center for the oil industry is another way the city maintains growth. Fairbanks is also home to the University of Alaska. Being so far to the north, Fairbanks serves as a great center to see the Northern Lights.  Bordered by expansive wilderness, the city is a connector to many other outdoor recreation opportunities.

The Morris Thompson Cultural and Visitors Center is centralized so as to provide information and overviews of the city. Many visitors like to indulge in the adventures that the Chena River has to offer, like rafting. In addition, the nearby Chena River State Recreation Area provides access to wilderness areas and bountiful acres to explore.

There is a free botanical garden in the city and a variety of museums and shops to visit. The area supplies a variety of breweries and local eateries as well. If you are looking for some mechanical thrills, there is even a theme park, Pioneer Park, to check out. And to top it all off there is a reindeer ranch in the city. That way, you can get up close and personal with reindeers.