Every year thousands of birds travel to their annual breeding grounds in Alaska. Other birds are year round residents to the state. The shorelines provide bountiful food for the coastal seabirds, mountains sprawl with young growth and plentiful bugs, and the rivers and valleys leave offerings for the scavengers. Alaska provides excellent bird watching where ever you are and is bountiful with a variety of different species to observe. 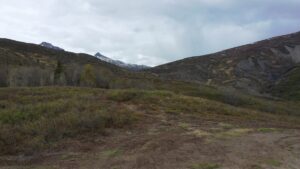 The willow ptarmigan is the state bird to Alaska. There are three species of ptarmigans in Alaska. The ptarmigan has a brown feather set during the summer and promptly molts to take on a white feathering for winter to camouflage themselves from predators. The ptarmigan has feathery feet to help navigate the frozen tundra as well.

During the breeding seasons the males will take on bright red “wattles” above their eyes for courtship. These birds subsist off a herbaceous diet. You can find them scurrying over alpine tundra or rustling through the overgrowth of summer brush. These birds frequent willow thickets in the summer months as it becomes their main food source. 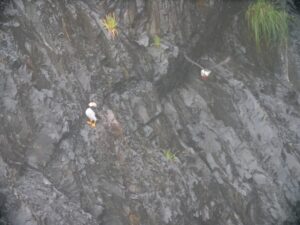 Both the Horned Puffin and the Tufted Puffin can be

found along the southern shores of Alaska. These birds spend a majority of their lives in the open water of the ocean. They have perfectly streamlined and stout bodies for hunting and swimming. During the summer time the puffins will make their way to islands, shores, and cliffsides to breed and lay their eggs.

Both puffins are better suited for the water than the sky though. With their dense bodies, they either have to hurtle themselves off of cliffs or skip across the water surface till they gain enough speed and lift to achieve flight. The Horned Puffin is characterized by the black horn that appears during the summer months above their eyes. This puffin is the one you typically spot on popular merchandise. The tufted puffin can be spotted by their two yellow tufts that protrude from the back of their heads. 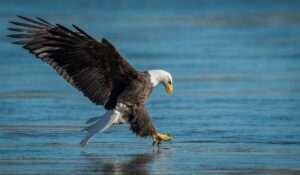 A Bald Eagle reaches for it’s next meal

Over 30,000 bald eagles are documented either migrating through Alaska or staying as year-round residents.(AlaskaGov)  These eagles roam the coastlines and flank the tops of dead trees in search of fish. This large predatory birds is known for their white feathered head. However, until the eagle is four years old they wear a solid brown feather set on their heads.

Additionally, they have extreme mating rituals. These eagles lock talons high in the air and plummet to the ground until they break apart at the very last moment. Once they are ready to welcome their new fledglings home, these eagles create massive nests. Some are the size of king size mattresses! 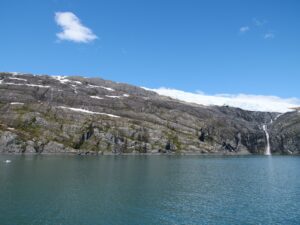 You can find these coastal seabirds floating along the open ocean. However, in the summer

months they nest high in the hard to reach cliff sides. They nest by the thousands. The loud cliffside nests are known as rookeries. The bird claims it’s name sake by it’s hallmark and shrill call of “kit-ti-waaaake”.

The mating partners take turns guarding their young and diving into the water to retrieve fish during nesting season. After the chicks are born a few months later, the chicks take their first chance at flight right from the towering stoops of their nests. As temperatures increase, the Kittiwake seem to be relocating to the northern shores of Alaska from their typical southern residency of the Alaskan coast.

This tiny and quick flitted bird is the northernmost venturing hummingbird species. They travel this far north to breed. Both male and females sport feathers of grandeur. The male has an iridescent red throat with an orange underbelly. Females have an assortment of green feathers on their tail and backs with a splash of orange on their throats.

Traveling from their winter months in Mexico, these hummingbirds have the longest migration route of all the hummingbird species. This hummingbird has been documented visiting the same breeding grounds every year. And, they also visit the same flowers and plants with each annual return. In advertently, these small birds have found themselves aiding in the pollination of the western columbine and Indian paintbrush plants.