Kodiak lies on the Northeastern side of Kodiak Island. The island is also known as “Emerald Isle”. It is the largest island in Alaska and second in the United States. Kodiak is located on the southern shores of the state, separated from the mainland by the Shelikof Straits. The city belongs to a sub-polar oceanic climate, which means that there are both cool winters and summers.

The Alutiiq people have been indigenous to the area for over 7,000 years. However, Russian explorer Stephan Glotov, who explored the inhabited area in 1763, claimed discovery upon arrival. In 1792, Aleksandr Andreyevich Baranov, first founded the city. Paul’s Harbor became the first named bay in the area. Additionally, this was the first capital of Russian Alaska. (Britannica)  The harbor proved worthy for settlers operating the fur trade. Then, damaged rained down on the city in 1914 along with the heavy blanket of ash from the Novarupta Volcano eruption.

Then, in 1964, a series of tsunamis, provoked by earthquakes, created millions of dollars in damage and destroyed coastal businesses. Afterward, commercial fisheries and canneries began to develop once Alaska was sold to the United States by the Russians. WWII developed Fort Abercrombie and brought a more stabilized resident population to the island. President Roosevelt introduced a variety of wildlife during his term to Kodiak. This established the Kodiak National Wildlife Refuge. 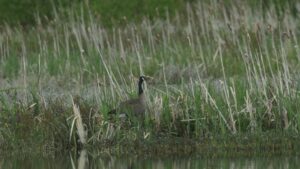 A Canada goose sits near a marshy area of the coast forging for food.

Docks still line the shore of this fishing industry based city. Beyond the boardwalks, mountains and forest decorate the area. The island is home to the famous Kodiak bear and many other wildlife species. Additionally, you can only reach this port by sea plane or boat. Many historical sites reside here close to the pristine wilderness.

Because of the ash settlement from the 1914 eruption, the ecosystems of plants has become dense and rich. This vibrant flora nourishes the native fauna and creates intricate bio diversity. The ports are filled with fishing boats, charter boats, touring boats, and all the bustling activity that comes with them. This city is a great place to enjoy coastal scenery and explore the nearby wilderness.

Fort Abercrombie is now a historical park that you can explore the WWII history of the city. The Kodiak Wildlife Refuge Visitor Center supplies information about the local area and wildlife as well as a hands-on museum. Russian influence has been preserved in an Russian Orthodox Church here. This building is now a historical site.

Simultaneously, a museum dedicates itself to the relics and heritage of the Alutiiq people and supplies information on their history. There is even an aquarium nearby that you can check out the coastal wildlife up close. The touch tanks can make the encounters pretty personal. And, many tours leave by boat and plane daily, creating access to the more remote areas.

There over 100 miles of rough terrain roads to explore on Kodiak. Four-wheel drive is a must on these. Easy access lies close to the city limits as expansive state and public land are nearby to check out as well. To end your days, you can look forward to the variety of restaurants in town to help end those days with a hearty meal of some local fare.