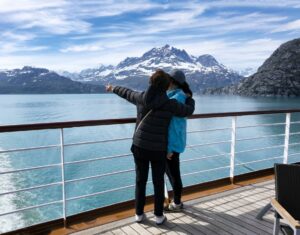 There are various species of whales in Alaskan waters each year. Humpbacks and Orcas are the most popular. But, there are also Gray, Blue, and Beluga whales as well. Knowledge of their migration patterns is essential for an Alaskan whale watching trip, so be sure to plan accordingly.

The most sought after whales are Humpbacks. They reside in Alaska during Spring, Summer, and Fall. Most commonly seen in Glacier Bay, the Bering Sea, and the Prince William Sound. They prefer to spend their time in the colder waters, until it’s time for mating and calving. During the winter they migrate to more tropical areas such as Hawaii, Mexico, and Japan.

Blue and Gray whales both spend their winters in Mexico. Gray Whales spend their Springtime in Alaska in the Bering Sea. Your best bet of Alaska whale watching is during April and May. Whereas, Blue whales are seldomly found close to shore. In August the Blue whale can be found in the north and east ends of the Gulf of Alaska.

The Belugas and Orcas differ from the others a bit as they can be found in Alaska year-round. The Shelikof Strait and Cook Inlet are a place popular to Belugas and Oracas. Orcas, or Killer whales, are actually not whales at all, but dolphins. Resurrection Bay in May and June is a great opportunity to spot whales migrating. They throughout southeast Alaska as well. 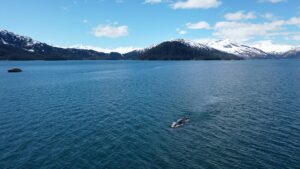 The best and most successful way to look for whales is from a boat. Whale watching tours are common everywhere the whales frequent and most are just a day cruise away. Some boats have hydrosound systems. This way, you can not only watch these magnificent animals, but listen to them as well. You might even be able to have an up close and personal interaction with them from a sea kayak. Don’t forget your camera because your Alaska whale watching trip is one you’ll want to remember forever.