14,000 B.C. is where we start to date our Alaskan history At this time, the Bering Land Bridge was the access route from Russia to Alaska. Russia laid claim to the land already inhabited by Native Alaskans. The U.S. government bought the land for 2 cents per acre from Russia in 1867.  Secretary of State, William Seward, considered the purchase foolhardy, and dubbed it “Seward’s Folly”.  In the 1890s, The Gold Rush era hit Alaska and its neighboring Yukon Territory. Because of this, population expanded, helped settle the wild area, and Seward’s Folly lost its stigma. 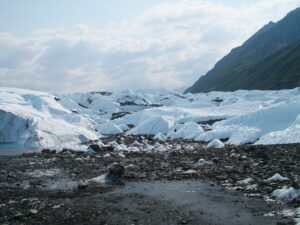 The Matanuska Glacier is nestled in the valley, spilling out from the Chugach Mountains

History of the Matanuska Valley

In 1935, the country struggled with the Great Depression. As part of President Roosevelt’s New Deal, the Matanuska Valley was home to a colony of settlers. These Northern states residents were chosen because of their ability to farm and live in the harsher climate. When the Matanuska Glacier retreated, it carved a wide valley, but the ground was full of gravel and boulders. Farming this terrain was difficult, but the colonists ultimately prevailed. By 1947, the Matanuska Valley had the largest dairy herds in the state.

Alaska officially became a state in 1959. In 1968, Humble Oil (later part of Exxon), discovered oil in the north slope’s Prudhoe Bay. This, accompanied with the building of the Alaska Pipeline, transformed the state into a giant in the petroleum industry.

Meanwhile, the state struggles as the abundant natural resources are utilized to enhance the tourism industry. As a result, mining, drilling, and other operations begin to throw the balance between conservation and industrial prosperity.

Today the Matanuska Valley is one of Alaska’s centers for tourism. There are sights and activities to please everybody and is just a short trek from Anchorage. You’re going to like what Alaska has to offer.