Southcentral Alaska’s shorelines define the coastal boundary of this region. Meanwhile, six different mountain ranges split up the terrestrial space and are noted by heavy glaciation. The Gulf of Alaska extends here and makes up many of the surrounding bays, sounds, and fjords.  Braided and glacially fed rivers now carve valley areas where glaciers have since receded. Alpine lakes sit high in between jagged peaks as well as stocked fishing lakes in the lower elevations.

The climate here is characterized as subarctic. This is to say that the area has long cold winters, with short, cool summers. The shorelines can have anywhere from moderate to heavy rainfall while the inland areas can be moderate to dry with fluxes of alpine weather systems. Flood plains sit on the sides of rivers and inlets in this region creating some marshy areas.

Coniferous forest make up the lower elevations while dry arid alpine tundra awaits travelers in the mountains. Many peaks stay snow covered through the year and hide alpine and hanging glaciers. Around the coast, due to glacial silt deposits, mud flats exist. The flats simulate a quicksand effect at low tide and can be fatal to those who try to traverse them. Rainforest ecosystems line some of the coast as well.

One of the major cities in this region is Anchorage, a large metropolis that acts as a base for a variety of travel as well as importing and exporting hub for goods around the world. Southcentral Alaska supplies a variety of fishing towns as well as valley settlements scattered along highways.

Some fishing towns that are more popular in this area are Homer, Whittier, and Valdez. Many visitors find themselves arriving to these ports by cruise ship. Some inland cities that are popular are Talkeetnah, McCarthy, and Palmer. Many state and national park acres fill this section of the state. Denali National Park, Chugach State Park, Wrangells-St.Elias National Park, name a few. That is not to mention the continually developing recreational areas. 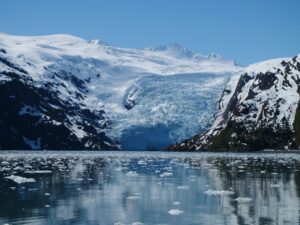 This area provides many of the hallmarks that Alaska takes claim to. The Columbia Glacier is perched in the bays of the Prince William Sound, one of the fastest moving tidal glaciers in the world. Nearby, the Chugach Mountains tower beside the Turnagain Arm towards Anchorage. The Glenn Highway takes you into the glaciated valley of the Matanuska-Susitna. Along these roadsides you can spot the Matanuska Glacier.

The peak of Denali looks over the landscape not far from Anchorage and the Talkeetna Mounatins provide a jagged boundary just beyond. From the valley back to port, the Wrangells- St.Elias National Park opens hundreds of thousands of acreage into giant canyons and leads to many of the connecting glacially fed rivers, overlooked by colossal mountain ranges.