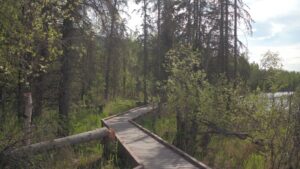 Anchorage is a major business hub and one of the largest growing metropolises. Situated in the Southwestern region near the Chugach Mountains, and is bordered by the Cook Inlet. This is a central hub for those traveling to the last frontier. As you begin to roam the city streets you can find yourself on the brink of outdoor exploration and adventures.

Long before Europeans arrived in what we know today as Anchorage, the indigenous Dena’ina Athabascans thrived. This matrilineal culture sustained themselves through hunting, fishing, and enjoying the abundance of the land. In 1835, Russians established a mission across the inlet from the area that constitutes the modern city of Anchorage.(Britannica) These eastern visitors traded with the local people initially, later seizing their land for commercial use.

The turn of the century marked the first industrial search for gold in the area. This event lead to a surge in new residents. As a result, this sudden increase in population introduced an influenza epidemic that wiped out nearly 90% of the Dena’ina people. (EklutnaInc) This left way for further redistribution of land and development.

In 1914, the Alaska Railroad was built, connecting the Cook Inlet to Fairbanks. On November 23, 1920, Anchorage became incorporated. Once the Dust Bowl Drought had devastated farm lands, settlers were provided federal assistance to create an agricultural community. This structure started to decline and WWII brought about the construction of multiple defense bases. The Alaska Highway was then developed to eventually connect the state to the continental United States.

Anchorage now is filled with a booming economy centered around tourism, defense projects and oil conglomerates. In addition, commercial fisheries weave their way along the coastlines, plumbing the depths for salmon, crab, and halibut. Anchorage is one of the largest cities in the U.S. It is comparable to the size of the state of Delaware. Over a quarter million people live in the the Anchorage area.

The city is often a main hub for supply transit, cruise ships, and international travel. Also providing easy access to surrounding coastlines as well as expansive wilderness areas. You can even spot bears and moose wandering through the busy streets! 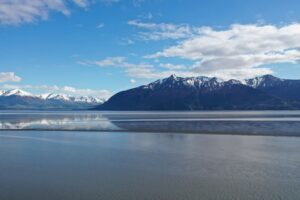 Looking out over the Cook Inlet that borders Anchorage

Anchorage is center to many forms of entertainment. For example, many renowned farm-to-table restaurants provide a foodie paradise. Simultaneously, tourism-based businesses offer rentals and gateways to your favorite guided adventures. You might even take your own adventure to sight see natural areas like the mudflats by the Turnagain Arm. Given the time of year, you may see the Bore Tide!

The outdoors is right inside the city limits here. Climb the popular Flat Top Mountain and spot views of the city and wilderness all in one vista. Or, you might take to the Tony Knowles Coastal Trail so as to explore the oceanside. Access entertainment or dive into the great outdoors, the choice is yours in Anchorage.