Southeast Alaska is also known as the ‘Alaska Panhandle’ due to its shape and position. The rainy and forested lands are known for their expansive and pristine wilderness. Simultaneously, much of this space is remote and has limited access. Other sections of the southeast are in the popular flow of those traveling the Alaska Marine Highway. This region was first inhabited by the Tlingit, Haida, and Tsimshian peoples.  Many indigenous people live off these lands today. 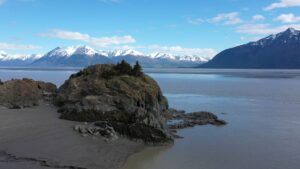 The rocky shorelines of Alaska

This narrow strip of coastline encompasses a majority of the Alexander Archipelago. This is a string of islands that extends into the Gulf of Alaska. These islands are a causation of both continental uplift and volcanic action. The islands and shores are lined with bays, fjords, and straights. These create intricate waterway systems and passage ways.

In many areas of southeast Alaska metamorphism has created strong and dense rock structures as well as erosive and crumbling rocks. Additionally, there are a variety of sedimentary and intrusive rocks at the surface layer. Tidal glaciers flow through the region and continue to shape the land as they have for millennia. Simultaneously, islands spot the shorelines and passage ways protect the shores that lay behind them.

This region lies in a mild but typically rainy climate. The maritime weather brings in cool summers and mild winters. The Pacific Ocean pulls in warm currents to the shores while the mountains regulate the temperatures and climate. These mild winters often lead to above freezing temperatures regularly. The southeast has a mixture of climates. Near Juneau the climate is categorized as marine sub-polar while the northwest border of the region is labeled as a sub arctic climate.

A majority of southeast Alaska lies in Tongass National Forest. This protected land is characterized by far-reaching coniferous forest, mossy terrains, and rainforest conditions. Meanwhile, a variety of the coastal areas experience extreme storm systems that build on the ocean and strike land with little to no warning.

Fishing, forestry, and tourism are the main industry for many cities. At the same time, coastal 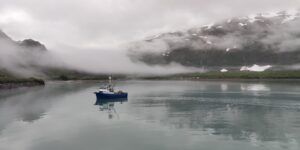 This fishing boat moves across a foggy bay

towns have a strong base in whale tours and sighting opportunities for the mass migrations that occurs annually. These areas can take you up close and personal to a variety of glaciers like the cities of Juneau and Ketchikan. Other regions of the southeast dip into the coastal wilderness like in Skagway and St. Petersburg. Some of the remote towns on islands require a boat or bush plane to access them.

In addition, Glacier Bay National Park and Preserve, The Tongass National Forest, and many miles of state and public lands wind through this section of Alaska.  Access ranges anywhere from recreation sites and day hikes, to multi-day glacier and coastal travel by permits. Explore the blend of historical influences in the region and get closer to the southeast Alaska for coastal adventures.