Originally the interior was home to the native Athabaskan peoples. This region provided an abundance in resources as cultures framed themselves with intricate bead-working. Today, many visitors find themselves moving to and fro from the interior as they travel Alaska. Thus, this region provides connection to different sides of the state by a few established highways. Much of the region is known as the ‘Alaskan Bush’.

The interior falls between the Alaska Range to the south and the Brooks Range to the north. The watersheds from the Brooks range border the north as well. Additionally, the Wrangell Mountains and Denali fall within this area. The nearby Yukon river spans over 2,0000 miles across Alaska, eventually finding it’s way to Canada. The highest peak in North America, Mt. McKinley, lies within this space too.

Most of this terrain is inaccessible due to its inhospitable features. Rugged peaks are split by the lows of glaciated valleys and crossed with ever changing rivers. Much of this area can only be reached by dogsled or bush plane. 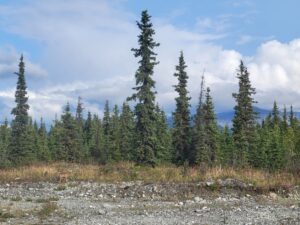 The forests here provide space to hike, ATV, and enjoy open skies for the Northern Lights

A majority of the interior is wilderness. The inland is hot during the summer and bitter cold in the winter. Simultaneously, the dark cold winters leave a perfect stage for spectacular Northern Light shows. Some areas here are bone dry while others become soaking wet through season and fill with the characteristics of wetlands.

Smaller coniferous trees dominate the forests here. Fireweed thrives and sprawls over the disturbed areas providing vibrant seasonal colors. And, as you near the mountainous areas you can find yourself traveling into tundra based ecosystems. Dependent on where you are in the interior you may even hit some layers of permafrost. This is an expansive and diverse terrain.

In the spring, the low lying western regions tend to flood with snow melt. Birds find residence on the soggy banks of the Yukon River so as to establish extensive ecosystems in the summer seasons. There are ample opportunities to spot moose, bears, and other wildlife in this region. Bird watching in the spring and summer are paramount here.

The largest city in the interior is Fairbanks. Other major city include the North Pole, Eagle, Tok, and Glennallen.  Many cities in the interior were born of the gold rush. Fairbanks is the larger of the cities in Alaska behind Anchorage. Many of the smaller towns give show to their historical roots and transitions in their more remote locations.

Pristine wilderness is around every turn here. Subsequently, parks and protected areas such as Denali National Park, Gates of the Arctic National Park, and Wrangell-St. Elias National Park provide millions of acreage to explore and enjoy. These protected space can provide anything from established camping areas, to unlimited access to famed Alaskan bush.