The state of Alaska operates a ferry service known as the Alaska Marine Highway. The headquarters reside in Ketchikan. The marine highway operates from the south-central coast to the eastern Aleutian Islands, to the Inside Passage, to British Columbia Canada. This ferry system serves the purpose of providing transportation to residents and visitors. This 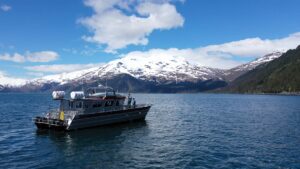 facilitates those traveling to places that cannot be reach by roadway. The highway even receives federal highway funding. The Alaska Marine Highway is a rare example of a public transit but for waterways, as opposed to the luxury cruises that frequent the ports.

The Alaska Marine Highway operates an extensive 3,500 mile route with a fleet of vessels so as to to carry passengers and vehicles ranging in size from motorcycles to large freight containers. The ferries operate year-round, providing essential transportation to over 35 coastal communities. Mainline vessels are the largest ships and take more than one day to travel between ports. Day boats connect smaller communities with each other. (AlaskaDOT)

The highway’s origins are tangled with the history of Steve Homer and Ray Gelotte. The two men originally established a fleet to service transportation from Juneau to Haines and Skagway. In 1959, once Alaska became a state, voters passed to have the ferry system updated. Once the two men’s company dissolved in 1988, the remainder of their business funneled to the states operating service.

During the Exxon Valdez Oil Spill, part of the state’s fleet were used as a spill response vessel to aid in clean up. From this event and the settlement from Exxon, the state was able to fund the construction of a new vessel that would operate as a command and control center in case of another disaster. 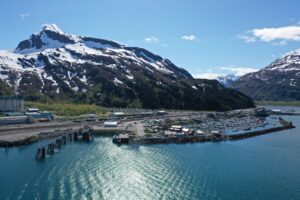 Whittier, a port stop on the Alaska State Marine Highway

The ferry service now focuses on a variety of routes to best serve the communities and their residents. Many of them supply day trip routes and others are more extensive. For example, the gulf-crossing route stops in remote coastal ports, only accessible by boat, with nine other port stops along the way.

Routes change with the seasons to navigate around ice sheets. The highway system carries around 350,000 passengers and 100,000 vehicles every year. The Alaska Marine Highway can be great for connecting ports with baggage, as well as providing more affordable transportation for those on a budget. Visit the DOT’s reservations to learn more about pricing and schedules.