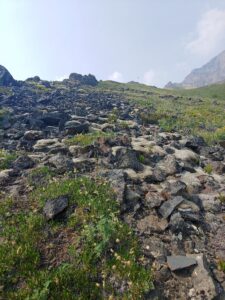 The terrain up Sheep Mountain is both rocky and plush

A midsummer day lead to the start of an abrupt and unexpected adventure, hiking to the peak of Gunsight Mountain. The curator of this event, our locally seasoned owner/operator/mentor of our outdoor company, Don Wray reached out to me. He handed myself and two other Apprentice Guides a sheet of paper. Further, the paper informed us this new assignment was to take place the next day.

Printed on the paper was a simple topographic map of Gunsight Mountain with dots indicating a “suggested” route to the summit. Subsequently, the only instruction we were given was where to park at the base of the mountain. It was our job to scout a new route up Gunsight and document the process.

Get Ready, Get Set

The evening before the hike the three of us sat down to plan the events of the next day. We used Dons “suggested” route to create a series of connecting straight lines on the app Caltopo. With these straight lines and the use of a compass we could determine how far and in what direction to travel based on how many degrees it was from North. With the route planned, we created a packing list: 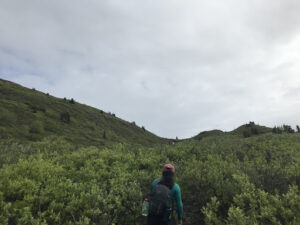 Wading through the alder and into the tundra at the base of Gunsight.

At 9:30 AM on June 21st we arrived at the “Gravel Pit”. This is the trailhead for Gunsight Mountain. It is located 1.5 miles East of Sheep Mountain Lodge on the Glenn Highway. We oriented ourselves so as to begin our ascent up the mountain. At first, we mostly traveled North, Northeast.

There is no existing trail and navigating through the Alaskan Bush can be tricky if not near impossible. Luckily the moose carve out a series of crisscrossing paths through the Alder bushes that we enjoyed using.  Simultaneously, as we moved through the bush, we stayed together and kept our eyes peeled for moose and bear. Each of us carried bear spray, and we consistently called out to warn the bears of our presence. We looked to surrounding landmarks, keeping direction, to maintain our orientation. 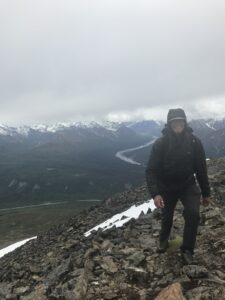 Smiling across the rocky ridges of Gunsight

Hiking to Gunsight, our first obvious checkpoint was to reach a small saddle located to our Northeast. As our group gained altitude we noticed the shift in the vegetation from dense alder to thick and sponge-like duff. While making orienteering easier, walking through the duff required high and deliberate steps. After reaching the saddle we got our first view of the actual summit of Gunsight. We changed directions and headed North, Northwest up a gully and into the tundra.

Seeing our goal was encouraging but the slope angle of which we were traveling had significantly increased. We now traveled at a much slower pace switch-backing our way up through steep tundra and loose rock. As the top of the ridge became closer the rocks over which we had to navigate became bigger and more loose. Additionally, we had to intentionally alter our course to avoid sections of the route that was covered in snow.

We decided an attempt to traverse the snow was too dangerous. Making one final push, we moved up the slope. We then moved in a horizontal line to avoid being hit by loose falling rock. Cresting the ridge brought incredible views that had been hidden until then. The summit was to our immediate right. We celebrated by having lunch and attempting to Facetime our fathers to wish them a happy Father’s Day. 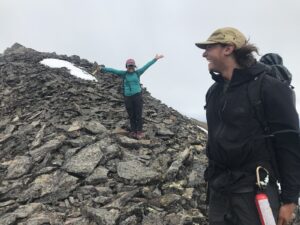 Hikers near the summit of Gunsight Peak

After spending a considerable amount of time taking in the views we headed down using the preexisting trail up the mountain. This trail was incredibly steep and required careful foot placement and balance. The route we had scouted on our way up was less of a harsh incline and gained altitude over a greater distance. Overall, it was 3.6 miles from the “Gravel Pit” to the summit, had a total gain of 3,538 feet, and took three hours to ascend. It proved to be a challenging but extremely rewarding hike that provided us the opportunity to practice our route finding and navigation skills in the backcountry of Alaska. The crew celebrated our successful mission with cinnamon rolls from Sheep Mountain Lodge.