When we think of whales, we are often filled with wonder and admiration. Their colossal size, graceful movements, and curious behaviors have the ability to invoke inspiration and feelings of connection to bystanders. Each species is unique in their own way, distinguished by their unique behavior or physical characteristics.

Beluga whales are known as the ‘White Whale’ due to their coloration. Their lack of pigment makes them one of the most easily recognized whales. This species is also one of the smallest to the whale family, ranging from 13 to 20 feet. Not only distinguishable thanks to their color and size, belugas are unique in their lack of dorsal fin and bulbous head shape. (National Geographic) The forehead or ‘melon’, changes shape with their vocalizations. This gives them the ability to make different facial expressions. (WWF)  Sometimes you might even see them giving the appearance of wearing a smile.

These whales are particularly vocal and use various chirps, clicks, and squeals to hunt and communicate, leading to the nickname ‘the canary of the sea.’ (WWF) As highly social animals, belugas congregate in small groups called pods. The pods hunt and migrate together, segregating by sex and ages typically. When searching for food they hunt cooperatively to conserve energy. (Georgia Aquarium) These marine mammals can turn their head in all directions, which is specific to their species alone. (National Geographic) 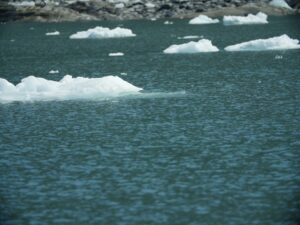 Delphinapterus leucas are typically found in Arctic environments.  As the spring and summer temperature break up the seasonal sea ice, these whales funnel in from the Sub-Arctic regions. While a majority of the species migrate from the Arctic to Sub-Arctic regions, some groups of belugas will stay as residents dependent on ice sheet movement. Belugas can be found in a wide variety of environments, from deep offshore waters to shallow bays and estuaries; even ranging far upriver. (Georgia Aquarium)

When observed in captivity, a beluga’s gestation rate can range from 15 to 16 months. (Georgia Aquarium) These whales reproduce solely in the spring and summer seasons. The White Whale gives birth to only one calf at a time and at a rate of every 2 to 4 years. The center of social structure in pod life is the relationship between mother beluga and calf, with other members of the pod acting to support that bond.

As we observe the change in shifting sea ice we also observe change in the beluga’s habitat. Ice sheets can trap whales as they shift, an often deadly situation. However it is forcing drastic change to their feeding, mating, and migrating behaviors. While some subspecies have seen limited affects on population numbers, larger groups have experienced detrimental tolls to their numbers, moving them further into the threatened species list.

Whales are primary stabilizers to our food systems. As top predators, belugas have an exponential effect on the health of our oceans and their overall stability. Whales affect not only the seas in which they live, they balance the health of the air and land as well. Protecting and conserving the habitat of whales is essential to life as we know it.