Alaska is home to a diverse collection of wildlife. From the North slopes, to the southern shores, and out on the Aleutian Island chain, Alaska’s 375 million acres teems with creatures that thrive in its 5 climate zones and surrounding seas. These wildlife sightings can give way to experiences that bring us closer to the environments we explore. 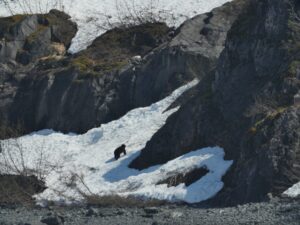 A black bear navigates across glacial areas in search of food

98% of the United States Brown Bear population lives in Alaska. Although, Grizzly bears are a sub-species, as are the larger Kodiak bears which inhabit Kodiak Island. If viewed from a safe distance, you can find the smaller black bear, and the illusive polar bear inhabits the Arctic coastline.

Caribou, often referred to as reindeer, can be seen in the tundra regions and mountainous areas. Often seen grazing on roadsides and marshy areas, Alaska moose are the largest in the world. And the all-white Mountain goats enjoy the rough and rocky slopes of the Chugach and Wrangell Mountains. 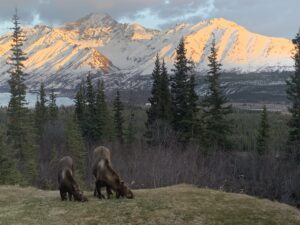 The small herd of Bison in Alaska are direct descendants of Bison transplanted from Montana in 1928. Now, there are about four herds and 900 bison roaming free across the state from this project. Situated away from most predators, Dall Sheep live in rocky steep terrain and are noted for the ram’s curling horns. Subsequently, you may spot them as just tiny specks of white on the mountain sides.

Moose are one of the more prolific species to inhabit many areas of Alaska, especially the interior. The Alaskan-Yukon race is the largest of the species in the whole world. Males, also known as bulls, can be found sporting a very large rack of antlers on their heads. They can be up to 6 feet tall and found munching on trees, shrubs, and grasses. 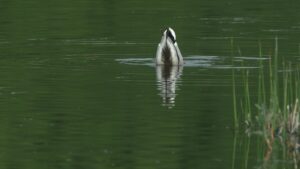 A Mallard duck dives underwater in search of more food

You will also find Alaska wildlife in waterways. Salmon swim in from the ocean and follow the freshwater stream of their birth to lay their eggs. Additionally, trout inhabit most streams. Orca swim and pack-hunt in the ocean from Southeast Alaska to the Aleutian Islands. Other whale species and dolphins, halibut, crab, and shrimp are plentiful. Otters frequent kelp forest as you can hear seals barking from across harbors.

Found only in North America is our national symbol, the Bald Eagle. Nowhere else is more plentiful with them than Alaska. Simultaneously, they fill the trees near Haines, AK, along the banks of the Chilkat River in January-February. Ptarmigan, geese, puffin are among the fowl worth watching for.

If you’re fortunate enough to explore Alaska, the breathtaking scenery will make your adventure worthwhile. And for many, viewing the Alaskan wildlife will be the “icing on the cake”. Always keep your eyes peeled and be aware of your surroundings, this will provide more opportunities for sightings and maintaining respectful distances from wildlife.