The Alaska State Fair: A History

The Alaska State Fair is one of the most popular celebrations in Alaska. This event encompasses a week and a half long festivity known for it’s amazing panoramic views of the Chugach Mountains and unique displays. Hundreds of vendors come in from all over the country and many farmers and ranchers centralize for a variety of competitions.

The fair is famous for their giant vegetable judging, art collectives, and animal displays. And that doesn’t even touch the expanse of food and ride experiences to enjoy.

From the Ground Up

So how did this celebration come to be and gain this momentum? We are going to have to travel all the way back to 1924 when the fair was introduced as the “Western Alaska Fair” by M.D Snodgrass. He was a retired experiment station employee who was in charge of supporting the settlement during the construction of the Alaska Railroad.

After all that work, and inviting various farmers to the area, he was ready to celebrate. The fair ran under that name till 1929. This was in part a piece of the efforts to settle the Matanuska Valley.

During the lapse between 1929 and the 1936 a handful of families were selected to start farming and establishing their settlement in the valley. Snodgrass organized with the Grange committees to put on the first fair, which was seen as a replacement for the defunct “Western Alaska Fair”.

The Fruits of Farmers

The event started as a 4-day celebration held in September. Grange raised the start up funds by selling live stock and established the event with an $1800 nest. Adults paid a $1 admission while children under 8 were free. The origination coincided with the Knik Bridge opening and was held at the Matanuska-Susitna Borough building. With the bridge and railroad opening, it allowed for more people to access the valley at once than ever before.

The first years festivities consisted of crowing the fair queen, a baby show, boxing matches, horse races, dances, rodeo, and some games. And, the ever famous vegetable judging was introduced. From there, railroad officials started offering prizes for largest vegetables such as the famous category of “largest cabbage” that is still held with reverence to this day. 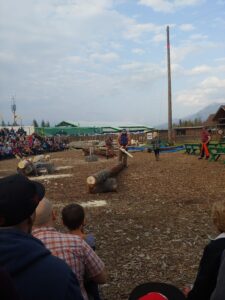 Participants chainsaw through logs as part of the lumberjack competition event

Over the years the fair took a few different hiatuses due to “war jitters” around WWII but came back in full swing by 1947. In 1950 carnival rides were introduced to improve a lacking money revenue. After the increase in people and money, the fair was officially recognized as the State Fair in 1956. Over the years the event became more and more popular, attracting folks from across the nation. Even then president John. F Kennedy, attended the fair.

In 1967 is when the fair acquired it’s position on the 300-acre location in Palmer that we know today. Over the years farming, sports, skill competition, food, and art collective relations have grown and thrived in this community. This includes the events and organizations that are centralized to the fair itself and cultivated space for year round events and celebrations on the grounds.

In 1967 72,000 people attended the fair. During the 18-day long 1998 fair was when the record breaking number of folks attended the event, clocking in at a whopping 361,804 people! In 2019 the estimated number of fair goers recorded was 303,989 people. The Alaska State Fair prides itself on being rooted in sustainability, locally run, and not for profit. This seems to create the environment necessary to keep bringing people back year after year.

Since the collective upheaval of a global pandemic, the Alaska State fair had to cancel for the first time since WWII! So last year, and this year, there is a bit more excitement and gratitude for this Alaska celebratory staple. This state fair is one for the books and is highly revered amongst the state fair circuit and those who enjoy the festivities.

The festival normally occurs between August and September. So if you find yourself near Palmer during those times be sure to check out the event and clear a few days for the experience. There is no way to fit the grandeur and immensity of this experience into one day, to learn more visit their website by clicking here.