Behavior of Seals in Alaska

Behavior of Seals in Alaska 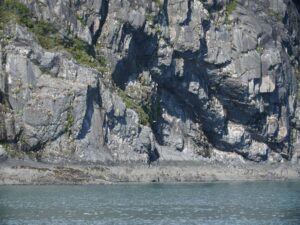 Seals love the cool and bountiful coastal waters of Alaska

A deep sense of immensity and connection reaches you the first time your eyes travel over the shorelines, fjords, bays, or sounds of Alaska.  All the elements are connected here. Each life form supports another. Some stand out more than others, making their presence more aware to us, giving us clues as to our place in this puzzle. One marine mammal that takes the opportunity to explore its curiosity and playfulness so as to occasionally make their presence known, is the harbor seal. We want to match their level of curiosity with our own and dive into the behavior of seals in Alaska.

Curiosity of the Coast

Paddling through the coastal regions in Alaska will leave you to have some interesting wildlife encounters. Some wildlife even like to check you out and see just who and what you are doing. The harbor seal is known for its interested behavior and phantom appearances in the water.

When harbor seals see something as a non-threat, and their curiosity pokes at them, they will take the opportunity to get a closer look. They will poke their heads and the upper parts of their bodies out of the water to try to figure out what is . Sometimes younger, less inhibited seals, will travel close enough to boats or rocky shorelines to show off the details of themselves and their excellent swimming skills.

Harbor seals are found in abundance in Alaska with an estimated approximation of 141,000 in non-glacial sites and approximately 15,000 in glacial fjords, a rough number due to the difficulty in effective census techniques. This is not to take away from the significant reduction in numbers since 1970.

These seals vary in color and size. Some have light gray sides and belly with dark blotches or spots, while others have a dark background with light rings. Like a human’s fingerprints, it is believed that the pattern of rings and spots on each seal is unique to that individual. These mammals sport a short bristled hair over their body that they molt seasonally. They can reach five to six feet in length while males tend to be a bit larger than females. These seals can weigh up to 285 pounds. 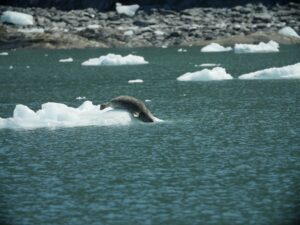 These marine mammals have adapted to perform best in the water rather than on the land. You may see a group of seals gathered on the shore but typically close to a water entry point. This is for quick access to safety if a predator were to be nearby. A seal has the ability to stay submerged for 20 minutes in the water, giving safe haven from terrestrial predators. However, most dives are typically under 4 minutes.

Harbor seals spend their time swimming through kelp forests, and exploring the bay area for various fish species to eat. These marine mammals are opportunistic feeders, taking chance to eat whatever viable food options might come their way.

Harbor seals haul onto beaches to relax, give birth, and nurse their pups. Seals will swim in solidarity in contrast to when they congregate in the thousands on land. When in groups they are referred to as pods or bobs. Seals will dive back into the water whenever they feel threatened, even if there is an aquatic predator.

The movements of these seals are dependent on sex and age class. Some seals display extensive travel, typically in the winter months, while others stay more localized. Harbor seals will communicate visually by slapping the water with their fins to show aggression. Males will also use this maneuver during courtship.

When decorating the shorelines, harbor seals move along in an peculiar way due to their fused pelvis bones. They pull themselves along with their front flippers, moving their body in conjunction with a caterpillar-like motion. In the water these mammals swim with elegance and grace. Using their fore flippers as rudders and their hind flippers for propulsion by clasping both hind flippers together. They splay webbed toes and move their large hind flippers side to side. Both their fore and hind flippers have claws that are used for scratching, grooming, and defense.

Connecting with the Coast

If you want a first hand chance at seeing the behavior of seals in Alaska it is best to take the more peaceful route. Paddle a sea kayak or walk to rocky beaches to catch views of these inquisitive but elusive marine mammals. By creating these non-threatening experiences you reduce stress and promote environmental stability for the Harbor Seals. You are a piece of these ecosystems once you enter them. Be sure to respect these fragile systems and support the living beings within them.

Seals birth their pups between May and mid-July, and gestate their embryo for eight and a half months during the winter and spring, mating in the fall. The young stay with their mother for one month.

When decorating the shorelines, harbor seals move along in an peculiar way due to their fused pelvis bones. They pull themselves along with their front flippers, moving their body in conjunction with a caterpillar-like motion. In the water these mammals swim with elegance and grace. Using their fore flippers as rudders and their hind flippers for propulsion by clasping both hind flippers together. They splay webbed toes and move their large hind flippers side to side.